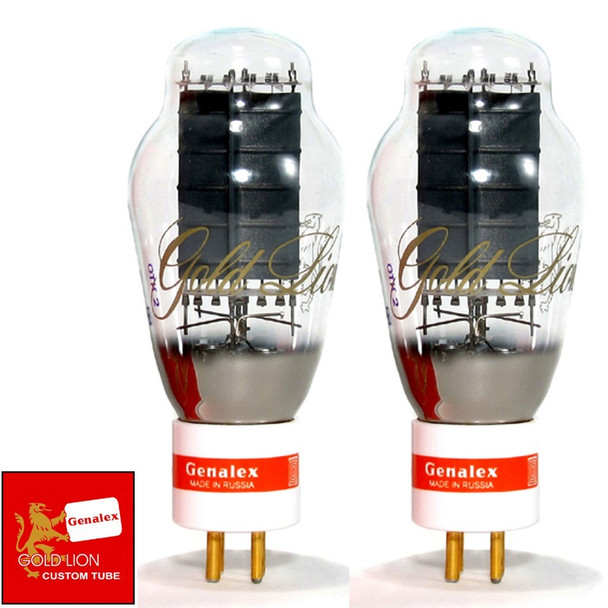 In Europe during the 1930s the GEC (Genalex) / Marconi-Osram PX4 and PX25 power triodes were considered the finest audio triodes of their day. In keeping with the tradition of Genalex to provide the highest quality tubes, New Sensor has released the Genalex Gold Lion PX300B audio power triode.

* A note about the Genalex 300B and its glow: Per New Sensor, it is not unusual to see glow such as fluorescence (slight blue glow) or varying degrees of filament glow in these tubes. They can have a relatively wide range of either glow and may have variances within any single matched set.

MSRP:
Now: $43.39
Was:
New Gain Matched Pair of Genalex 12AX7 Standard Pins Vacuum Tubes These are so close to the originals we could hardly tell the difference in both appearance and sound. Of course, these are made in...

MSRP:
Now: $207.99
Was:
New Plate Current Matched Pair of Psvane 300B Hi-Fi Series Vacuum Tubes As one of the most prominent audiophile vacuum tube manufacturers, Psvane’s designs have established a benchmark for...

MSRP:
Now: $194.62
Was:
100% GUARANTEED & TESTED TUBES All tubes are tested for Gm, shorts, leaks, gas, and noise on one of our vintage, calibrated, or state of the art digital tube testers. Buy from the experts and...

MSRP:
Now: $103.40
Was:
New Plate Current Tested Psvane 300B Hi-Fi Series Vacuum Tube As one of the most prominent audiophile vacuum tube manufacturers, Psvane’s designs have established a benchmark for clean and...

MSRP:
Now: $201.39
Was:
New Gain Matched Quad of Genalex Gold Lion KT88 (6550) Vacuum Tubes These are as close to the original Genalex KT88s as you could possibly get. Made in Russia, they look identical to the originals...